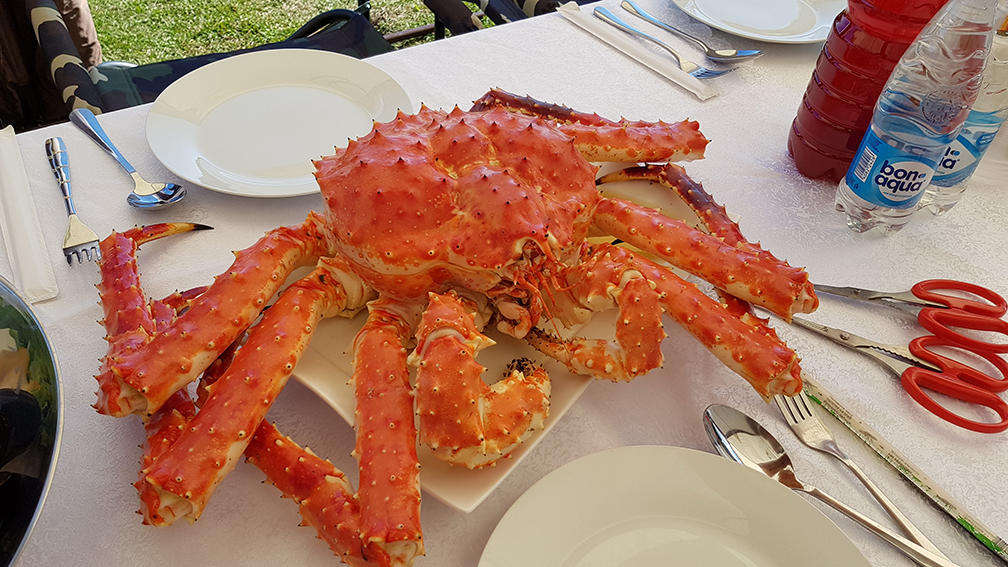 Duration:
7 days
Difficulty level:
Moderate
Number of people in group:
from 4 people
Escort:
Guide
What to take with you:
Comfortable clothes and hiking boots for climbing, windproof suit, camera

In the world of tourism Sakhalin region is quite famous. This is the only region in Russia, that is completely located on islands. This is the region where the penal colony existed in XIX-XX centuries. In XX century Sakhalin was divided between Russia and Japan, and during Japanese governorship a lot of Koreans were brought here as a workforce. After the end of World War II many Koreans and Japanese remained on Sakhalin.

All these events took its toll on gastronomy image of Sakhalin. Japanese and Korean cuisines are widely spread on Sakhalin no less than the traditional Russian one.

Sakhalin and Kuril Islands are rich with a wide variety of sea food and delicacies. Crab, oysters, scallops, sea urchins, red caviar, etc., this is a long list to describe. The history of cooking and eating fish appeared on Sakhalin few centuries ago. Even during the time, when Sakhalin was inhabited by indigenous people – such as Nivhs, Ainu, Evenks, Nanaians – fish was the main source of catching and living.

You have a unique opportunity to get a true gastronomy delight, while learning more about our unusual region. Historical, cultural and natural attractions intertwine with gastronomy adventure. You will not only taste oysters, freshly cooked shrimps, sea urchin, mussels, different kinds of crab and fish and fresh red caviar, but also take part in master classes, learn the secrets of cooking traditional dishes of Korean and Japanese cuisines.

You must have heard quite a lot about sushi, rolls, miso soup and ramen. But have you ever had an opportunity to cook rolls and sashimi with fresh seafood? During this tour, you will have a chance to make your favorite rolls and sushi with your own hands.

Korean cuisine is the first cuisine you will get acquainted with during your journey. Every one of us wants something spicy from time to time. And in this case Korean cuisine is at your service. You will have a great chance to make one of the most famous Korean dishes - Hemultan soup (seafood soup). Also you will learn recipe of another popular dish – “Chapche”.

What are you thinking about when you hear about Sakhalin? We are sure that the first words that come to your mind are fish and caviar. We would share the best recipe of fish soup, cooked at the open fire, smoke the fish according to old techniques and, of course, make a fresh caviar that you would cook under the supervision of our chief.

Have you ever heard about our oysters? And have you ever been at the lake, which shallow waters are full of oysters? You are going to be very surprised by what you see. Oysters, scallop, whelk, mussels. Our chief would show you the ways of cooking them. Many people are surprised when we say that all of this could be cooked, since they are used to eat them raw, but we would show you the best recipes of these amazing delicacies.

It is time to go fishing, since we are on Sakhalin and are surrounded by sea. The motor boat awaits to take us to Okhotsk sea, when you can try your luck at fishing perch, codfish, greenling and salmon. After fishing, at the seaside the chief will glad to cook what you have caught. And apart from the fish you would be able to catch, you would have chance to taste the main symbol of Sakhalin cuisine at your table - crab.

14:00 Return to the shore. Lunch from caught fish

15:30 Return to bus. Departure to leisure base «Bambuchky»

Return to hotel by yourself