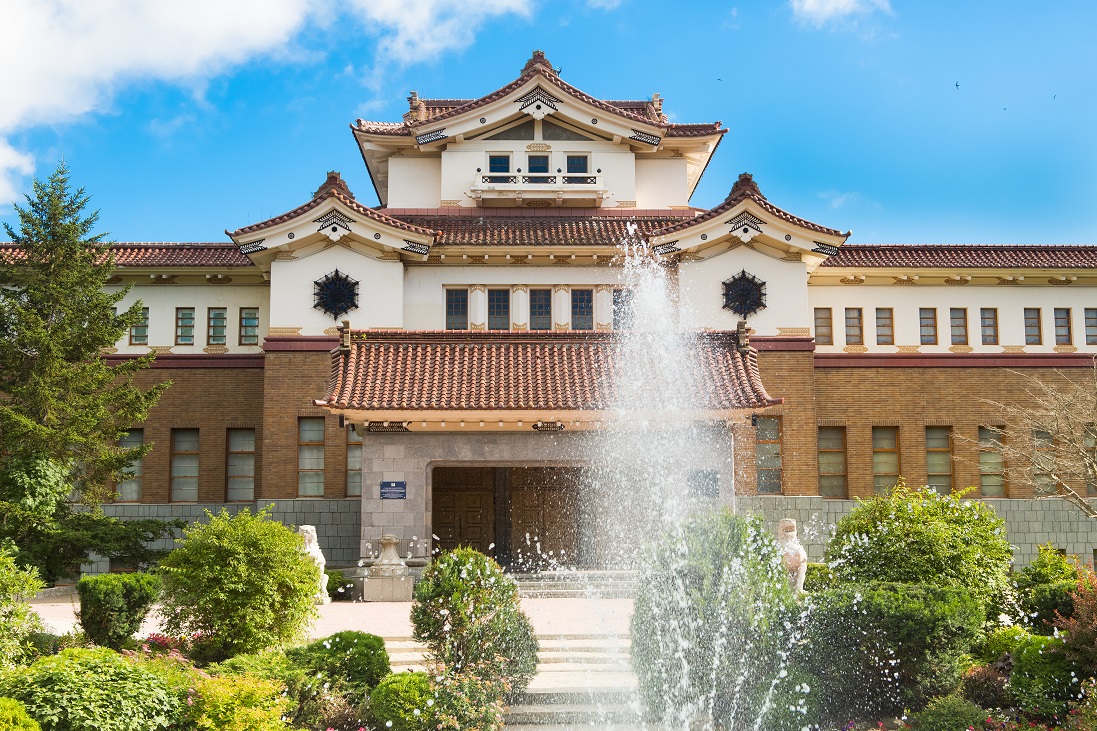 This is the longest-lasting and the most unique tour to Sakhalin and Kuril islands by its components. In 16 days, you will visit 4 islands of our region to see all popular and breath-taking places – bays, capes, volcanoes and manifestations of volcanic activity. This tour is a great opportunity to take healthful baths in both civilized and wild hot springs. You will move from island to island with the sense of bitterness from parting and once again admire the places of astonishing beauty and power.

Tikhaya (quiet) Bay, which shores are covered with rare herbs and flowers, was named Tikhaya by famous seaman Ivan Fyodorovich Kruzenshtern. This is a rocky inaccessible island, inhabited primarily by loud sea gulls. Only their calls break a drowsy silence of this corner of paradise.

Bezimyannaya bay. Since 1972, when the film “The Life and Adventures of Robinson Crusoe” was shot, the bay has been called Robinson's Bay. However, this name is not popular, because the name Bezimyannaya (“Nameless”) has already taken root. According to many eyewitnesses, this bay is the most beautiful natural place on the island, along with the Tserkovnaya bay.

Krai Sveta cape (“Edge of the World”) is high, wavy and long, like a rolled scarf. Take a short walk to see the Pacific Ocean opens up in front of you. That's it, this is the end of the territory of Russia. Further, after 8 thousand km of water, there is only America. Underfoot, at the bottom of a sheer fifty-meter abyss, heavy waves beat against the stones. Strong wind makes its presence felt by almost tearing you off the place and charge you with the energy of this place.

Each bay of Shikotan Island has its own energy. No one knows the origin of the name of Snezhkov Bay. But this place is charming because of its views and the road leading to it. The opening spaces of velvet hills with overlaid embroidery from thickets of juniper attract and beckon. You can lie on a juniper “sofa” for hours, inhaling the delicate and invigorating aroma of healing pine needles and enjoying the exquisite view of the bay. But we continue our way to the bay, where we will brew the tea with wild rosemary leaves and feel like experienced travelers.

Dimitrov Bay and the peninsula of the same name got their name in honor of Dimitrov Georgy Mikhailovich, an outstanding figure of the Bulgarian labor movement and the founder of the Bulgarian People's Republic. At first sight, Dimitrov Bay doesn’t make a vivid impression. But our way lies along the bay of the Dimitrov Peninsula. The Pacific Ocean, breaking its formidable waves against the stone gates, which look like the giants of the peninsula, and the quiet harbor of the bay form an unforgettable contrast. Rugged, steep rocky shores together with a cozy smooth surface of a small lagoon, that separates the Dimitrov Peninsula and Dalniy Island, are not just impressions, but a whole palette of feelings that will stay with you forever.

Iturup – is one of many islands of Kurils, the biggest one and has the widest range of attractions. One of them is Baranskiy volcano, which height is over 1000 meters. There are a lot of mud pools, hot lakes and mineral streams at its bottom.

Yankito plateau is one of those places that are interesting by the way they appeared. Solidified black lava in combination with green grass and bright flowers looks very unusual. And there is the info that the evidences that people used to live here during neolithic age have been found.

Are you aware of the fact that there is a huge variety of hot springs at Iturup? If you choose to travel to Iturup Island with us, you will have an opportunity to visit 3 hot springs resorts. You can swim in acidulous springs near Baranskiy volcano, take radon bath at "Vannochki" resort and enter sulfur springs at "Zharkiye Vody" ("Hot Waters") resort. But you must be very careful before visiting hot springs and consult with specialuist before doing so.

Arrival at Yuzhno-Kurilsk. Transfer to hotel. Check –in

Excursion to Caldera of Golovnin Volcano

Walk to fumarole field through underbrush of bamboo which height can be up to 1.2-1.5 m.

Acquaintance with flora of Kunashir island.

On the way if desired guests can take bath in wild nature hot springs and mud pool.

Walking to Stolbchatiy cape, arrival at the destination

Transfer to port. Get on the boat

09:00 Departure to Bezimyannaya (Nameless) Bay and Kray Sveta (Edge of the World) cape

09:00 Excursion to Mt. Trezubets and Mt.Shikotan. Tracking route (there and back – 6 km)

Return to Kurilsk. Dinner at café

Excursion to the White cliffs

Quick meal before departure to airport

Arrival at Yuzhno-Sakhalinsk. Transfer to hotel